“You think this is the end, well it is”

As I have said this is no thesis but a few final thoughts remain. First, the degree of intermarriage among big textile families in Bradford was every bit as complicated if not as arranged, as that between the reigning house of Europe! Even so the ramifications of Milligan/Briggs connections in the 19th century in a small area are remarkable.

Nathaniel Briggs was at Cliffe Cottage, his son Arthur at Cragg Royd, his parents-in-law the Womersleys and later the Fisons at Mawcroft; Robert Milligan ,brother-in-law of Briggs and followed by W.H. Ripley and Susan at Acacia. The Ripley’s eldest son Edward married the Major-Generals daughter, Robert’s nephew, Harrison Milligan was at Benton Park and his daughter Lydia married Harry Dewhirst whose father William was at Woodlawn and his brother Herbert at Buckstone Hall.

Robert’s brother Walter was at Lowroyd and his niece Jane married to Charles Stanfield at Woodcliffe, whilst Robert’s brother Thomas Milligan’s widow Mary remarried to Edmund Wilkinson Bell and lived at Holmehurst.

As for connections other than by blood or marriage, Thomas Fison’s brother William’s business partner W.E. Forster lived briefly at Lane Head, Robert Milligan’s business partner Henry Forbes was at Summer Hill and his former employee J.V. Godwin at Micklefield House and later Crowtrees House. What a cast for a soap opera!

There was never the gap between old money and trade that many Victorian novelists imagined. We have seen whom Richard Hird’s daughters married, a Ripley married a Green-Emmott; a White, of the family that Charlotte Brontë thought rather common married a Stott-Stanhope of a family dating back to about 1300, the younger lines of which had provided three earls, Chesterfield, Harrington and Stanhope.

Secondly, it is easy to forget today how important denominational differences were even as late as 1914. Places of worship were centres of social as much as religious life and few married out of their own sect. Indeed the Quakers completely forbade it until about 1890. Moreover, though it may not be correct to say so in these ecumenical days there was a distinct pecking order among the denominations. Obviously the Established Church, provided it was decently low, took precedence. Wesleyans tended to look down on Ranters and all sorts of Methodists had little time for Old Dissent. The whole lot of them were apprehensive of Catholics be they Roman or Anglo. Quakers were difficult to place. They were, and are, good people and this country owes much to them. But their distinctive quirks, “thee and thou”, their liturgy of silence, unswerving pacifism and the rejection of even the 39th of the Anglican Articles set them apart from all other denominations. However some of them became very wealthy and serious money, then as now, had to be taken seriously.

It is commonplace to say that Dissenters by reason of their exclusion for so long from the older universities, public office and the armed services turned to commerce and industry and with their life style of plain living and high thinking prospered and some exceedingly. But as they prospered they and their children tended to drift to Wesleyanism and/or the Established Church. “It was the dissenters second horse which took him to Church.” So, for better or for worse, chapels and schools have closed and become housing sites and many people do not know from which place of worship they stay away.

I hope that by A.D.2100 when the A65 is a six lane highway, the top of the Billing a helicopter pad, Cragg Wood a theme park, St. Peter’s and Trinity Churches old persons homes, Woodhouse Grove a luxury hotel and Benton Park a factory (or perhaps vice versa) some future historian of Rawdon may find this glimpse into the past of some interest. 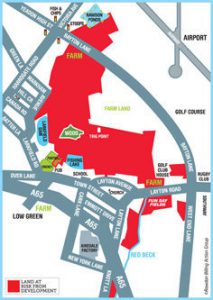 The views from the top of Rawdon Billing take some beating. The area is open access – free for everyone to enjoy. The threat by Leeds Council to remove the land from the green belt status would ruin forever the maginficient views which stretch for many miles in every direction. Once built upon this land will be lost for ever.

The area cannot take further development, the traffic on the A65 is frequently bumper to bumper and practically stationary. For those who travel around Britain when you return to Leeds, one can see the city is on the verge of grid lock and becoming a no go place for those wanting to setup businesses.