With apologies to Dr. Samuel Johnson

In many ways Little London is a separate village to what many still call “Old Rawdon” i.e. the area based on Town Street. This is largely due to different land ownership patterns as far back as the 17th century.

As we have seen the Rawdons were sympathetic to dissent and although by the end of the 17th century they were settled in Ulster, their influence lingered and Quakers and Baptists took over. There was far more fragmentation of land ownership in the western end of Rawdon than in the eastern end where there was unified ownership by the Laytons and later the Emmotts and Green-Emmotts all of whom, more or less, supported the Established Church.

By the time of the development of Little London in the first part of the 19th century the area included the Baptist Chapel and the Quaker Meeting House was within easy reach of Primitive Methodist and Congregational Chapels which were soon to follow. There was also the Quaker/Baptist school in Apperley Lane and after 1846, Milligan’s school in Micklefield Lane.

Without access to many sets of old deeds or prolonged research at the former West Riding Registry of Deeds at Wakefield, it is impossible to date buildings precisely but the oldest buildings in the area would appear to be Smithy Hill cottages
1 on the Yeadon side of Apperley Lane (about 1750). Micklefield Lane was cut through and the second Baptist Chapel and Lane Head House were built in 1765.

The first record of serious industry seems to be when ‘the works’ to the north of the house called ‘The Grove’ is referred to in a lease of 1783 from John, Jeremy and Sarah Pratt to a clothier called Taylor. One of the Pratts then sold the building in 1785 to Benjamin Grimshaw, a great grandson of Abraham and Sarah (see p. 25). In 1800 Benjamin bought six cottages and ‘the field to the south of the cottage’.2 He built The Grove3 soon thereafter. On his death in 1817 he left a widow, Catherine, (née Whalley), a son Samuel and three daughters. Catherine died in 1832 and was described as owning about six acres of land and 14 cottages.

Samuel also owned the quarry4 to the north of The Grove and came to describe himself as primarily involved in quarrying and dealing with stone and only secondly as a clothier. Most of the stone used in building Little London must have come from the quarry.

By 1838 Samuel had sold The Grove and 10 cottages5 to Francis Simes. In 1840 Simes sold to William Turley then living at Lane Head, who already owned eight tenanted cottages in London Street.

Some cottages on the north side of London Lane5 and in Micklefield Lane appear to be late 18th century, but the bulk of the cottages in London Street, Princes Street and Lombard Street have external architectural features which suggest a development over a shorter period of time, though it is obvious that plots were developed piecemeal. The 1838 Tithe map shows that of the 80 or so cottages surviving today, 67 had already been built, including the three storey weavers’ cottages in Lombard Street, the three storey building in London Lane facing up Whitelands, which is said to have been a warehouse6 and a ‘beer shop’ in Lombard Street. Of the 69 cottages, nine were owner-occupied and the remainder tenanted. It is said that the name Little London came from a local man (Benjamin Grimshaw?) who had been to London and was much impressed.

John Grimshaw (born Calverley 1756) built the house now called ‘Pennygate’ together with a warehouse at the top of what is now Springfield Road. John seems to have concentrated more on cloth than stone having one of the horse mills that Slater referred to. He became bankrupt, partly through guaranteeing his brother-in-law William Thompson, who failed (see p. 69). By 1845 William and John Yewdall, millowners at Eccleshill were operating in the area.

The whole area was much given over to hand-loom weaving. In the 1851 Census, 85 cottages are shown with 110 occupiers describing themselves as weavers. The trad-itional name Clattergate was applied to the part of Micklefield Lane below the end of London Lane.

Upper Lombard Street, King Street, Queen Street and Salisbury Street, together with the terraces fronting to Micklefield Lane came after the auction sale of William White’s estate in 1863. The terrace near the Park looks the oldest.

The most unusual building in the area surely must be West View (1870/1880) built onto the gable end of an existing cottage on an odd shaped piece of land. It was built by a Mr Brayshaw as a combined house and draper’s shop and used from the 1930s-1970s as the offices of the Pudsey Constituency Conservative Party. It is now a private house.

The eight larger terrace houses in Springfield Road were designed by George Foggitt and built in the late 1890s. The Spring Bank houses (not Foggitt’s work) may be a little earlier, but why did the development cease so dramatically where the terrace turns into Micklefield Lane, leaving the outstanding ‘toothing’?

So by the end of the 19th century a largely self-contained community had grown up with a chapel, a pub, a doctor’s surgery, a post office, a grocer, two butchers (one at 12 Micklefield Lane where the front still survives and one where the present hairdresser is) and a draper. London Lane was widened about 1929 when both the end houses in London Square were demolished and the exposed gable ends rendered.

There has been a little 20th century in-filling (The Row for instance in the 1920s) and very pronounced ‘gentrification’ in the last 30 years or so, but all the services have gone save for the pub, the hairdresser, a newsagent, a small general store and a second hand car dealer. Doubtless this shows the changing needs of consumers!

1. There is a striking similarity between the blocked Venetian Window in one of these cottages and the Venetian Windows on the West side of the quadrangle at Woodhouse Grove. Common Quaker influence?

2. These may be Grove Cottage and the London Square cottages which are said to be older than The Grove.

3. Mrs Cornaby (née Foggitt) a former missionary in China had a kindergarten school here for very many years earlier in the last century.

4. The adjacent farm was known as Quarry Farm until the late 1980s when it became the site of Belgrave Mews.

5. London Lane was straightened earlier this century when both end houses to London Square were demolished and the gable ends rendered.

6. The post office was moved to the end house in Spring Bank and later in the early 1970s was moved to its present position at Rawdon crossroads. There is also another pre-1838 warehouse to the South side of Micklefield Lane with a ‘taking-in door’, but now used for residential purposes. 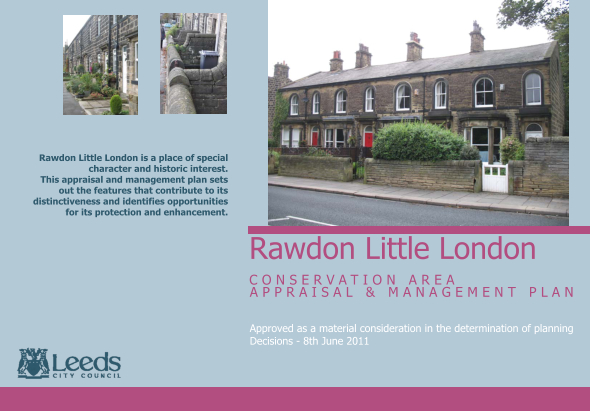 In 2011 Leeds City Council created a plan for the conservation of Little London. (Ironically since then some of the flag stone pavements have been replaced with tarmac by the council). Willcock would have been flattered to learn that he has been quoted.

The graphic takes you to a copy of the plan.

The plan is a PDF 3.82MB in size – takes a few seconds at least to download.